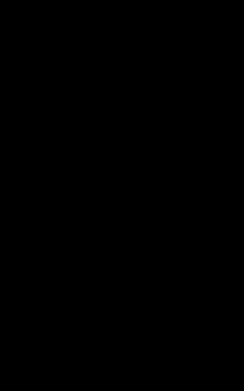 As you've undoubtedly surmised, the severely adumbrated parallelogram above is the famous final page of the twelfth chapter of the first volume of The Life and Opinions of Tristram Shandy, Gentleman, by Laurence Sterne. Actually, it's the final two pages, back-to-back sides of the same leaf. I should also say that I spent a good half an hour trying to decide if it's appropriate to use the word "adumbrate" in the way I have just now. I couldn't decide; it probably isn't. I also had to look up parallelogram. Although, I really shouldn't say had to, since it's good to look up words if you need to (and even if you don't need to—you still might learn something). I got to look up parallelogram. That's better. As I was saying, or rather was about to say, Tristram Shandy is, unlike many classic novels I have attempted, a book with which I became wholeheartedly and enthusiastically devoted to from the very first page. It has been a constant (okay, intermittent) companion since October 2005, a few months after I commenced my short-lived dishwashing career in Bloomington, and it has followed me to New York, all the way to my desk here at...uh, the place where I work. This morning on the train I finished the ninth chapter of the second volume (out of nine volumes), which puts me about 90 pages into a 600+ page book. My goal is to finish it before the end of the world in December 2012. I might have to pick up the pace. Anyway, this is another book that I think would go over well with high school kids, better at least than The Scarlet Letter, a probably irrational hatred for which I cannot seem to get over. We would do well to keep in mind that when I express certain feelings about The Scarlet Letter, I am expressing the feelings of a 14-year-old, specifically the 14-year-old self of mine who read it. None of my subsequent selves has read The Scarlet Letter. But I still think it would not be a bad thing if someone were to sneak into a high school library late at night and replace every copy of The Scarlet Letter with a copy of Tristram Shandy.

In other news, I have just been informed that Australian composer Percy Grainger, "avowed racist" and "Duke Ellington fan", had a collection of 70 whips. More on that later, perhaps.
Posted by (who else?) Matt Walker at 2:50 PM