I watched this for the first time in years last night, and I was happy to learn that it's as good as I remembered it.  Very energizing.  The animation technique they invented for the movie is still really cool even though the advertising world has caught on to it.  I hadn't seen Slacker yet when I saw this the first time—that's another one you should see.  And you should see Before Sunrise and Before Sunset.  I haven't seen A Scanner Darkly yet, but you should see that too just for good measure.
First of all, though, you should purchase Waking Life and watch it at least once a year.  Great contemporary chamber music soundtrack.  Somewhere in my apartment there's a book on lucid dreaming that I got because of this movie.  I want to read it and learn how to have lucid dreams.  I've had one or two before, but not recently.  I haven't been dreaming much at all recently.  Well, a little bit, I guess, but I haven't been remembering them very well, if at all.
[I just murdered a gnat.]
A character in the movie explains lucid dreaming, so that's why I got the book.
One weird thing about the movie is that there are a lot of people I recognize by face and voice, but I don't know their names.  You know, character actors.  But I mean it's weird because I saw "through" the animation and recognized the people even though I couldn't and still can't recall exactly what I'd seen them in before.
In other movie news, I've had The Dreamers sitting around waiting to be watched by me for (gulp) a few months.  I don't even want to check the exact date of rental, I'm so disgusted with myself.  Netflix is as evil as it is good.  The problem is, I feel like I need the right occasion to watch this movie.  I've seen it before, so I know what to expect, and I'm waiting for the right conditions to coalesce, or something, in which I may have the optimum viewing experience.  Sorry, I really can't get more specific than that. 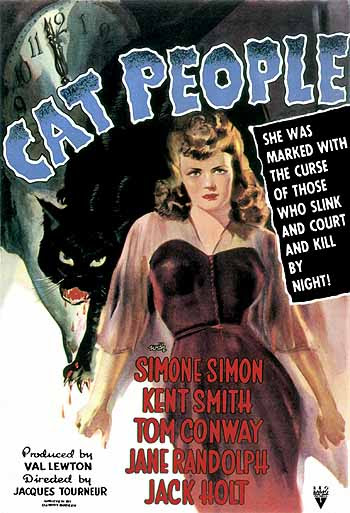 Friday night I watched the Val Lewton movie Cat People.  So good, though I made the mistake of lying down while watching it, which meant I nodded off a couple times, just briefly.  But I don't think I missed anything important, and if I did, all the more reason to see it again.  Actually, that state of late-night drowsiness is my favorite way to watch old movies.  Even if I lose track of the plot, the atmosphere is always there.  That great old-black-&-white-movie atmosphere.  Atmosphere.  A lot of poetry I like works on that level.  Little J.A., of course, and lots of other people.  I think there are a lot of people who don't like to be inside an atmosphere.  I mean, they might be okay with being inside as long as they feel they're moving toward an exit, a path toward a resolution.  They don't like to just be inside.  They want to feel more in control, maybe, or maybe the opposite, that they're being controlled, or led by the hand, as they might spin it.  But then again I don't mind being manipulated (by art).  Huh.  I'm in too deep.  I've written myself into a corner, but it's a good corner, I think.  It's an ideal equilibrium between comfortable and uncomfortable.  I'm happy.
That said, I'm bored with writing poetry and (trying to write) fiction.  I probably need to invent some other kind of writing and then write that.  But I think any new kind of writing would or could probably just fall under the category of "poetry".  Well, that's ok.  Please excuse me while I go invent a new kind of writing.
First I think I have to watch this rerun of Cops.
Posted by (who else?) Matt Walker at 2:07 AM