They were having a sale; I was filmed. 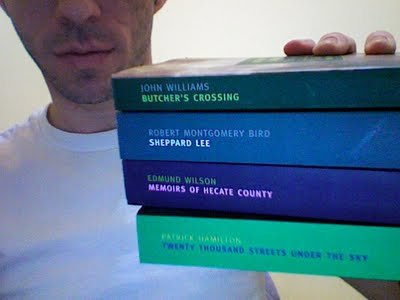 So instead of typing out all the titles of the books I acquired at Book Culture tonight, I'll just let you observe and contemplate the above photograph. There are more copies of those plus many other NYRB Classics on sale for half price or less on a table upstairs. Last week after buying books at a different store I vowed not to buy any more books this month. And then I heard about this. So much for that. I need to start actually reading some of these. I've been thinking of setting February 19th, 2010 as my final deadline for finding a new job or other situation, and if I don't have anything in the offing by then, I leave New York. That would be two days shy of the third anniversary of my current job. (Setting it just before the anniversary is of course symbolic—the thought of having been there for three solid years is, um....) Anyway, I need to figure out what to do in the next four months. Trying harder would probably be a good start. Tonight as I was picking out the books above there was a girl with a video camera getting footage of the store and interviewing a guy who works there. After the interview she asked me if she could film me looking at books. So I did that for a few minutes. At one point, after standing still for a minute looking at one book, I made the decision to put it down and reach for another book—a book I wasn't actually interested in—for the benefit of the film. Throw some movement in there, give her something to work with. I think you could say that real life transitioned into acting in that moment. So the film, even though the filmmaker (who I think was just a journalism student) will never know it, went from being a documentary to a work of fiction, just for those few seconds. Then I resumed my legitimate browsing, and it became a documentary again. Within my lifetime half the world's animal and plant species will be extinct. Hard to know what to do with that. I guess we had a good run. Couple million years? Something like that. Here's hoping the next intelligent hominid species that evolves will be slightly less stupid about everything. Maybe we could leave them some information, some guidelines. "Don't use fossil fuels. They will kill you. Moreover, those fossils used to be us. Literally. Also, try to be nice to each other. It will make you feel good, and sometime when you feel like eating but don't have any food, those people you were nice to before might let you have some of their food. In gratitude for their hospitality, you can then do something nice for them again.
And so on.
P.S. Here are the collected works of _____, _____, _____, _____, _____, _____, and _____.* Use them to start a new civilization.
Good luck. That is all.
Signed,
We Who Are Totally Screwed"
*Fill the blanks in yourself. You can add or subtract blanks too, whatever. It's kind of hypothetical anyway.
Posted by (who else?) Matt Walker at 12:57 AM