This came up recently. Apparently it is regional. In every region I've ever known, it's "all of a sudden". It's certainly a lot easier to say than "all of the sudden". Is it a cliche? Is it okay to use? Is it a cliche that's okay to use? I feel good about it. And this feeling was reinforced tonight when I read this sentence from Kathleen Rooney's For You, For You I Am Trilling These Songs, which I picked up at the same time I acquired The Hitchhiker's Guide to the Galaxy:

On the other [hand], we pondered, we had gone twenty-some years with relatively hairy crotches, so what made us decide to get waxed all of a sudden?

See how well it works there? To me, it's not a cliche if it can't be broken down or replaced with something simpler. If it's the only way to say exactly what we mean, why not say it, even if it is a cliche?

Ate at Tom's Restaurant (the Seinfeld coffee shop) for the first time tonight. Usually it seems too crowded. Probably because it's the only diner in the neighborhood, as far as I know. At least the only one on Broadway. And who, when on Broadway, wants to bother to leave it? Anytime you're on an avenue uptown, the other avenues to your east and west seem like different time zones. You're hardly aware of their existence. Anyway, I sat at the counter at the diner. Have I done that before at any diner? I don't know why I don't. Chipotle has many stools, and I always use one. Tonight I immediately recognized that I like stools for the same reason I like apartments better than houses: you feel like you can leave at any time. With booths and houses, you're too ensconced, too settled in. A big reason for this is that your feet touch the floor. With a stool, your feet are suspended. It feels cleaner to eat this way. "Clean livin'!" he said to himself as he shoved another in a series of greasy fries into his gob.
I didn't really say that to myself, but it reminds me that I did enjoy the dialogue going on between the guy to my left and the guy behind the counter. The guy behind the counter was/is Greek, I learned. The customer spoke clearly and loudly, in a classic and deliberate New York accent. At one point he said something like, "I've been skating since I was a kid, and Manny, I tell you, I enjoy it to this day." Those might not have been his exact words, but my memory is only so good. What struck me about the conversation was how scripted it sounded. Every half-minute or so it would be interrupted when the guy behind the counter had to attend to something, and when it resumed, it would pick up exactly where it had left off, just like a Hollywood screenwriter would write it. I mean the whole conversation was like that, like a Hollywood screenplay. I'm fairly certain the Greek guy's name was Manny, even though he was Greek. Maybe not. Wouldn't be surprised though—the ratio of guys named Manny to guys not named Manny is very high in New York. High Manny density. The conversation reminded me a little of Don DeLillo dialogue. You know how it sounds kind of unnatural? It sounded kind of like that. But wait—I just said it sounded like a Hollywood screenplay. Well, which is it, Hollywood screenplay or Don DeLillo? Maybe a Don DeLillo screenplay? Sure, let's go with that. I learned Greece is bankrupt, or something. The guy behind the counter mentioned the term, "APR". The customer, nodding, said something like, "So, the adjusted percentage rate...." Well, I looked it up just now, and "APR" really stands for "annual percentage rate". But if the Greek guy caught this mistake, he was too polite to mention it. But look at me, acting all high and mighty. I had no idea what "APR" stood for until tonight. So those guys knew more than I did. But none of us knew it exactly, apparently. I wonder if anyone in the restaurant did.
So yeah, I went out tonight, even though I'm still sick. The sore throat seems to be mostly gone, but it might come back in the morning. I would have been justified calling in sick at any point from Wednesday on, but I don't call in sick for colds. Luckily I haven't had the flu since 2007, when I first started working where I do. Haven't thrown up since 2/27/04. That's a six-year vomit streak, folks. Time flies when you're not vomiting.
How about those Bulldogs?
Yesterday I got out of work early for Good Friday. Sick, yes, but I didn't go straight home. My strategy when sick is to pretend I'm not sick, thereby making myself feel less sick, is how the theory goes. I walked from work uptown into the East Village, reading Ted, Ron Padgett's memoir of Ted Berrigan. The book mentioned that Berrigan and Joe Brainard had an apartment at 210 E 6th St. So I walked up there and took a picture: 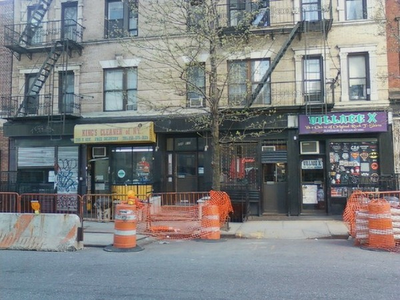