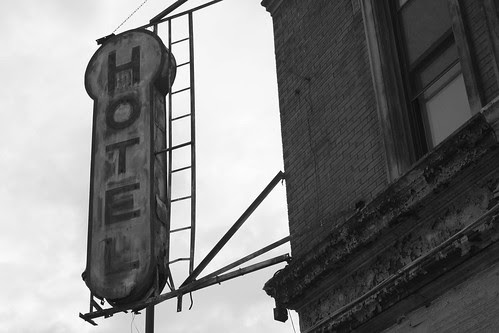 So the other day I was ambling down along the Hudson west of the Village and in amongst all the new crap going up around there I saw this ancient ghost of a hotel at the corner of Barrow and West. So I took a couple pictures. There was no name on it that I could see, so later at home I googled the cross streets and learned that what I had accidentally discovered was the Keller Hotel, built in 1898, later home to the Keller Bar, reputed to be the city's first leather bar and the birthplace of disco. That's right people. I discovered the birthplace of disco by accident. The Village People posed in front of it for the cover of their first album. It closed in the 90's, but it got landmark status a few years ago. I've read that plans are underway to convert it into apartments, but I didn't see any signs of construction. More info here. (A slightly outdated article.)